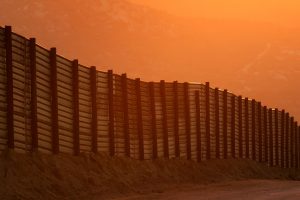 A September report announced by the Department of Homeland Security indicates that border apprehensions, are at record lows. Not since the
1970s has there been such little movement at the border. Homeland Security also indicated that the U.S.-Mexico border is now more secure than it has ever been.

But the Trump white house, apparently ignoring these facts Yet despite these trends are still trying to fulfill a campaign promise to build a
border wall along the Mexican border. The White House recently announced the accomplishment of eight different border wall models.

Today there are approximately 650 miles of border fence. These barriers are made up of metal or concrete posts, corrugated steel walls, and metal fencing. The have to be durable enough that they cannot be pierced in under an hour and should be visually attractive on the U.S. side of the border.

With the models now complete, Customs and Border Protection (CBP) will begin its testing phase of the various border walls to determine if they
meet the requirements. The testing phase is estimated to take up to two months. Completion is planned for the end of 2017. However, no one knows what will happen after the testing phase is completed.

Currently, Congress has not assumed any additional funding to CBP to begin building the wall. Remember earlier this year the President asked for $1.6 billion for construction. According to the Migration Policy Institute, the cost to build the remaining border wall segments is estimated to be between $15 and $25 billion.  The Senate Homeland Security and Governmental Affairs Committee minority staff created a report which indicates the cost of could be nearly $70 billion.

I guess Mexico is not going to pay for the wall. LOL.

Moses Apsan, Esq. emigrated from Brazil in 1955. He is a past President of the Federal Bar Association, New Jersey Chapter (1997-2002), and was Coordinator of the Annual Immigration Seminar, and a member of The American Immigration Lawyers Association. He graduated New York Law School with a Juris Doctor, Cum Laude degree and was an editor and writer for the Law Review. He graduated from Long Island University in 1970 with a degee in Business Management. He is a 1966 graduate of The Bronx High School of Science. He writes for jornal.us and The Brasilian. He hosts a weekly Law Television Show, (você e a lei - You and the Law) every Tuesdays at 8:45 p.m. on SIC International Television in Newark (Portuguese). He writes and publishes web sites on legal matters. His videos on immigration laws are widely viewed on youtube.com, vejatv.com and Google videos.